Before the general election, each state has its primaries and caucuses that kick off election seasons. If you’re nodding your head like “yes, of course, the caucus,” but secretly have no idea what the heck everyone is talking about, this explainer is for you.

Before a presidential candidate can be on the ballot for the general election, they have to win the approval and backing of their political party. Think of the caucuses and primaries as the NFL playoffs—with candidates dropping out after each round of voting—and the general election this fall is like the Super Bowl where (usually) two candidates go head to head for access to the oval office.

How Is a Caucus Different Than a Regular Primary?

Every state has either a caucus or a regular primary, but both are part of the primary election process. A regular primary is essentially a ballot election, open to all eligible voters in that party. A caucus is more of a political event, especially for Democrats (more on that in a bit).

Both are run at the state level, but primaries are run by state governments, while caucuses are run by state party officials. In terms of accessibility, voters participate in primaries by casting a ballot at any point during on a primary election day. Caucuses, on the other hand, take place at a very specific time, in a specific place. If you’re late or unavailable, you cannot participate. Caucuses are also a much larger time commitment, with some taking several hours to complete.

What Happens at a Caucus?

So what actually happens at these caucuses? A lot depends on your party affiliation, but there are a few things you can expect no matter who you are. For both Republicans and Democrats, a caucus can be a long affair. Voters will meet at schools, churches, and other community centers across a state’s precincts, and then kick things off. Each precinct chooses or introduces its delegates, or their party representatives to the national convention later this year. Party officials do some last-minute campaigning or give a few speeches, and sometimes presidential candidates will even attend. Finally, after all of that, the actual voting will begin.

That’s where things start to differ dramatically. Here’s the breakdown:

If You’re a Republican:

After hearing some speeches and maybe talking with a few politicos, you cast a secret ballot in a private voting booth just as you would during a regular primary or general election. That’s it for a Republican Party caucus.

If You’re a Democrat:

The voting process at a Democratic Party caucus is a little more physical and time-consuming, but also a little more exciting. Here’s how it all breaks down:

That process continues until there are only viable candidates left. If this process sounds like it could get intense and loud, you’re correct. This video from inside a 2008 Iowa caucus will give you a little taste.

What Happens After That?

Finally, the delegates from each state go to their respective party’s national convention and cast their vote for their party’s presidential nominee. They usually vote based on the results in their precinct, so it’s not uncommon for winners to be forecast early on. That said, delegates aren’t necessarily required to uphold their pledge, so a close race can still be anybody’s game. After the delegate’s votes are counted, each party announces their presidential nominee.

How You Can Get Involved

If you want to be part of the process, caucuses are a chance for you to put your vote where your mouth is. There are a few things you should know, first:

The voters you’ll find at caucuses are usually a little more politically involved, but that doesn’t mean you can’t or shouldn’t participate. So get registered and to be the change that you seek.

Explainer provided by lifehacker.com What are Caucuses and How Do They Work? 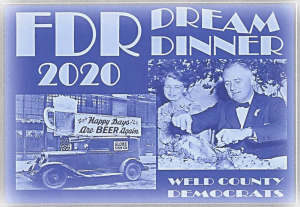 The Weld County Democrats are disappointed we cannot get together with you at our annual Roosevelt Dinner Fundraiser! We still need your donations to support candidates, texting, and Get Out The Vote initiatives! Though you won’t actually get any food from the Dream Roosevelt Dinner, hopefully you’ll enjoy this  fun way to stay safe at home and still donate to causes important to you.