Redistricting: It’s All Over But the Shouting… 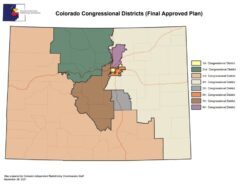 The Colorado Independent Redistricting Commission voted on and approved the third version of the redistricting map submitted by staff. Most Democrats favored the second version of the map, but what was finally submitted is probably something we can live with. I, for one, would have loved to see Joe Neguse go head to head against Lauren Boebert, or to have had her face a primary in her new district, but alas, now that is not meant to be. The final map will keep most if not all incumbent candidates in their current districts. That however, was not in the criteria for the mapping of the districts.

Some of the more significant changes to Weld County involve taking Greeley and many cities south including Evans, Milliken and Johnstown, Ft. Lupton, Gilcrest, Mead, Dacono, Firestone, Frederick, (but excludes Lochbuie), and putting them in the new district. These cities join with Brighton, Commerce City in Adams, Thornton and a little North Denver to make the new district, number 8. Weld County now is split in three districts. Most of Weld will be in CD4, including now Windsor, which in the previous map version was not. All of Erie is now in CD2, but Berthoud is now part of CD8, Loveland and parts of Ft. Collins are now in CD4. For a good explanation of maps go to: Colorado’s Final Redistricting Congressional Map Could Give Democrats, GOP Equal Number Of Seats | Colorado Public Radio (cpr.org) or the redistricting.colorado.gov website.

What we are most excited about is that the new district 8 will be a more competitive district and will give the Hispanic/Latino population (at 38.5 percent), a more representative district, and more definitive voice. The CPR article claims that this new district will be more competitive with conservative Greeley, but looking at how Greeley voted in the last election, much of the city leans blue as does Ft. Lupton. For once in a  long, long time, Greeley may have a chance at having strong, effective, progressive candidates. Candidates we hope who represent more than just oil and gas interests.

We will have to see what the Legislative Redistricting Commission comes out with for its final map, but the last version did give us hope in keeping HD 50 nearly intact. That map won’t be released for several more weeks.

Our next big agenda item of course is the upcoming election. Be sure and check your voter registration, if you do not get the voter’s guide blue book, or if you do not get a ballot, be sure and check your address at Voter Registration in Colorado | Vote.gov . You can get more information on voting in Weld County at Weldvotes.com. You will be able to begin dropping off your ballot beginning October 8 at over 17 drop boxes throughout the county. You can also mail in your ballot. You will be able to vote in person at select locations beginning October 25th. This is an extremely important election. We have many good candidates for School Board, and City Council, that are imperative to vote for. There are several very important ballot issues, so please do not neglect your civic duty to vote.

We also are in desperate need of poll watchers and election judges. If you can take the time to participate, please contact me or the Weld Dems office, and we will set you up with some information and training.

This is a very tumultuous time of year and with redistricting, the rest of the year and into the beginning of next year will be unchartered territory for us. Please look for updates on coming events and ways you can participate and help make sure our voices and interests are represented, not restricted, and that our rights are protected. Help us Get Out The Vote!