Redistricting and the Shadow of What’s New for 2022 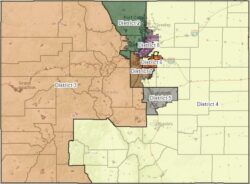 By now, many of you have probably seen the preliminary proposed redistricting map released by the Colorado Independent Redistricting Commission. It is mostly bad news for Weld County and especially Weld County Democrats. Under the proposal, Weld County would be split into three different districts.

As published in the NoCo Optimist, Analysis: Weld County is booming. That’s complicating its politics — The NoCo Optimist , the preliminary map released Wednesday afternoon, shows the Weld communities of Johnstown, Mead and Erie pulled into District Two, to make this even more complicated and ignoring any ideas of communities of interest, Milliken, Platteville, Firestone, Frederick, Dacono and Fort Lupton — and some outlying areas of southwest Greeley and Evans — would be pulled into the new Eighth Congressional District. This new district would have a heavy Front Range / north Denver suburb influence; it also would contain Westminster, Arvada, Thornton, Broomfield and Brighton. (Which might not be a bad thing.)

The Fourth Congressional District — represented now by Windsor Republican Ken Buck, will be stuck with the eastern plains, and southern Colorado (which would now have a huge Republican advantage of more than 20 percentage points). Greeley, Evans, Windsor, Severance, Lochbuie, Hudson, Keenesburg, and the remainder of Weld’s vast but sparsely populated areas would be united in a huge, huge area encompassing more than half the land mass of Colorado, joining Greeley with Pueblo, and clear over to Mineral County. How in the biggest stretch of imagination could these be communities of interest? How could this meet the criteria of being a competitive district with a 20 percentage point Republican advantage?

Fortunately, this is just a preliminary map and we still have opportunity to let the commission know that this is not a reasonable map. On August 14 at noon, hearings will be held in person in Greeley to give residents a chance to voice their concerns and ideas for a reasonable and workable redistricting map. You have to register in advance to participate in the hearing remotely on line, and you can go to the redistricting website to sign-up. They will have a form for this purpose soon. Colorado Independent Redistricting Commissions. If you want to go to the live hearings, you can also register on line or register when you get to the (to be determined) location. Please consider
registering and showing up to testify. The decisions made here will determine voting and representation for the next 10 years. We have to be sure we get this right. We have so much to lose if the current proposal is adopted.

The specter of redistricting is casting a shadow over what may become one of the most bizarre voting years ever. Since we have no idea how and when this redistricting will be completed, (it could be completed by prescribed deadlines, or be dragged into myriad lawsuits), this makes the prospect of a smooth running election cycle to be anything but. Currently our County Clerk has estimated that 30 precincts will be spit, due to population shifts and increases. To have this all set and completed before March first, considering final census data and finalized redistricting maps may be delayed, not to mention the problems that may occur with commissioner districts locally, the chances of our caucuses being held, the first week of March is not likely. Yet, the CDP is determined to have caucuses on March 1, 2022.

They have outlined some new guidelines and rules for caucus. First caucus must be held Tuesday, March 1, but can be extended to continually occur through March 5, which is a Saturday.

* Per State Law, you must notify your County Clerk in writing of your choice of date and time of your caucuses no later than January 2, 2021. Per CDP policy, you must send that notification to the CDP by the same deadline.

This is all well and good, but what if we don’t have any idea what precincts are where? How can you caucus if you don’t know what precinct you are in, let alone what district you may be in? Setting up locations for these will be a nightmare a costly nightmare. To help with that problem we have been advised that we can hold caucuses, in-person, remotely by zoom, or a hybrid of both. Voting can be conducted by paper ballot and by electronic voting. (This idea is well meaning, but theory and practice are two different things.)

Here are the some stated new rules/guidelines:

-Eligibility. Participants must still be registered, affiliated and reside within the precinct 22 days before precinct caucuses, but now pre- registered to vote 16-year-olds can attend, vote, and run as a precinct organizer and as a delegate.
-Candidate Preferences. Will begin candidate preferences at the county level instead of the precinct caucus level.
-Date Flexibility. 1 st Tuesday – 1 st Saturday
-Virtual or Remote Caucuses allowed – but not required.
-Electronic Voting is allowed — but not required.

In addition, we have been told that we can hold caucus and assembly on the same day if we want. So if we really are into chaos, and the certain brain damage this would cause, we can add this element to the mix.

So far, this is the plan. I will keep you posted on how this progresses. This is going to take much planning, organization and hard-working volunteers to carry this off. The uncertainty will make this interesting and difficult. Hopefully as time goes on, we will have a more definitive forecast of what we are in for and can plan accordingly.