Redistricting, Good News, and Much Work Needed Ahead 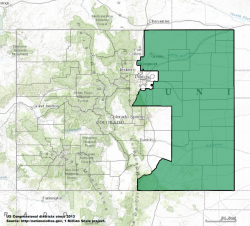 Governor Polis just informed us that preliminary Census 2020 data for Colorado shows that our State has grown by 745,000, up from the 2010 census of over five million, to nearly 5.8 million people, a 14.8% increase since 2010. This increase will gain us an additional congressional district, the first in over 20 years. The bulk of the growth has occurred in the Denver Metro area. No one is sure where in the state the district will be added, but it makes sense to add the new district where the growth occurred, and not add the additional district to any rural areas, that have not experienced any lion’s share of the growth. That however, will be up to the redistricting commission.

Despite what some political pundits might say about Colorado, we are currently a very blue state, not purple. Democrats hold four out of seven of the state’s U. S. Congressional Districts. Democrats hold both U. S. Senate seats, both chambers of the statehouse and the governor’s office. In addition, the Colorado Secretary of State, the Attorney General and State Treasurer are all Democrats.

So herein lies our opportunity, we need to work on changing those disgruntled Republicans who left their party to become at least left leaning Unaffiliated and try to pull many of those to a Democratic affiliation. Unaffiliated is the largest voting block now in Colorado, but also in Weld County. Sadly, other than president primaries, Unaffiliated voters have little to no say in picking viable state and local candidates to run, and are at the mercy of the two major parties . This might be a talking point to influence Unaffiliated voters to change their registration. Ninety percent of Unaffiliated voters do vote in a partisan way, but can’t pick who is running, and have no leadership roles within precincts. The choice in picking viable candidates is the first important step in the political process. Even Mussolini understood the importance and once quipped that you can vote for anyone you like, as long as I pick the candidates. By being opted out of this step, Unaffiliated voters lose a voice in the control of that part of the political narrative, diminishing their influence. Our two–party system is unlikely to change anytime soon. Registering, and re-registering people to vote is going to be a big part of our efforts for Getting Out The Vote this year, as well as encouraging and fostering good candidates to run.

How voting will work this coming year will be determined by the two redistricting commissions, made up of an equal distribution of Democrats, Republicans and Unaffiliated voters. A non-partisan staff committee will draw the final districting maps with the input of the commissions. We have described in previous articles what a mess this is going to be and now with the addition of the 8th congressional district to the mix, nothing is going to work according to the imposed deadlines for caucus, assemblies and conventions. Add the new district and the expected lawsuits that are pending, and we will be lucky to have any reasonable or timely voting processes in place, and certainly won’t meet any deadlines, except perhaps for actual voting days set by our Supreme Court. Next year will be a voting year like none other. Our Weld County Clerk has already told us that caucus and assemblies will not take place on the dates now scheduled. Precinct changes are anticipated and that will affect precinct leadership, the political process and voting in general.. At least 29 Weld precincts are anticipated to be affected, and probably more.

So how can you help? First, find out as much as you can about redistricting, and how to
communicate your wishes to the redistricting commissions. There have been several webinars on this topic. The next available session is on May 10. The contact and sign-up information is in this newsletter and on the website, and other sessions are being planned. Your opinions wishes and input are desperately needed to guide the commissions on how to make this redistricting process, fair, competitive, congruent, transparent and doable. Next, if you know of strong and viable candidates for anything from schoolboard to congressional representative, please encourage them to run. There are several great programs for training on how to be a candidate, and the Party’s priority is to find strong democratic candidates and to help them win. If you are interested in running for something, have good ideas for registering and motivating voters, or just have an idea for how Weld Dems could do something better, please contact us, or fill out a volunteer form.

Colorado Will Gain Eighth US House Seat Based On Census

It’s Official: Colorado Will Get An Eighth Congressional Seat in 2022

Democrats Soar Ahead of Republicans in Party Identification Poll…